When designing any kind of system or service it is important to see it from the user’s point of view. We believe the same is true for animal agriculture. When McDonald’s UK tasked us with improving their egg supply chain we started our process by understanding the chicken.

McDonald’s Hens and Trees
We discovered that our ordinary chicken’s ancestor was a South East Asian jungle fowl. It lived and flourished under the canopy of trees. This varied environment allowed the chicken to have and do what it wanted – some shade and protection from predators, elevation and opportunities to perch, the covered ground to scratch and peck for food and dust bathe to keep its feathers clean.

The environment in the South East Asian forest is a far cry from how chickens live in most of today’s conventional and free-range egg production systems. In principle, the free-range system is closest by allowing chickens access to the outdoor. But what we found was that most free-range farmers reported that their chickens hardly used the range. It turned out they spent most of their time inside, or hovering right outside the door, rather than wander out into the open field.

By looking at the origin of chickens, understanding their innate behaviors, reviewing the currently available science and conducting our own on-farm trials with meat chickens (a slightly different bird to those that produce eggs, “laying hens”), our hypothesis was that the open field was also unattractive to the laying hen as it represented threats of the unknown, as well as fear of predators and harsh weather from above.

In 2007 McDonald’s UK approached us with their challenge. They had made a commitment 10 years earlier to go all free range, but they felt this was “free” in name only and as a result they had not been able to generate the consumer excitement or producer benefits they had hoped for.

So we suggested trees.

McDonald’s planted trees on all the farms that supply free range eggs to their restaurants and we monitored the subsequent improvements. We found that simply planting trees outside hen houses improved the welfare and production of the flocks. When laying hens in free range systems are provided with trees, they range more. We found that being out more and venturing further afield means that the laying hens don’t peck at each other as much, which in turn improves the welfare of the flock. For the first time, we also showed that this improves the productivity of the flock. We found that the provision of trees on the range reduces the mortality in the flock. We also found that planting trees on a minimum of 5% of the range lowered the numbers of ‘egg seconds’ – which due to their lower eggshell quality are worth 30% less than grade A eggs – subsequently boosting the farmers income. Trees incidentally, also boost the soil and the wider environment through reduced nutrient leaching and carbon sequestration, as well as providing opportunities for multiple incomes off the land through agroforestry or combining egg production with growing nut trees or fruit orchards.

After years of implementing and documenting this practice across their supply chain McDonald’s this year featured the story of layin hens’ love for trees in one of their advertising campaigns.
See more (external link in a new tab)…

Adding whole eggs to a colourful salad boosts the amount of Vitamin E the body absorbs from the vegetables, [...] 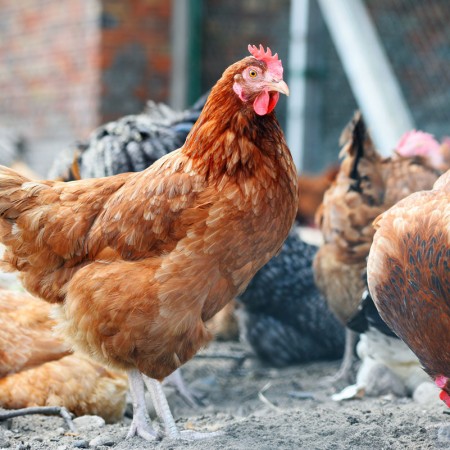