Growing international concern over antimicrobial resistance is forcing poultry producers across the world to look at new ways of maintaining production levels and keeping birds healthy. Glenneis Kriel heard from two feed and nutrition experts about the importance of good gut health.

Antimicrobial growth promoters have been used for more than 60 years to boost animal growth and feed efficiency in many countries. It is thought that most of these benefits come from suppression of the population of microbes in the gut, as these tiny creatures can compete for nutrients with their hosts as well as causing disease. Rising fears about drug-resistant diseases are, however, resulting in widespread bans on using the antimicrobial drugs for growth promotion. But prohibiting these products comes at a price.
At the AFMA Forum held at Sun City in South Africa earlier this year, Kostas Mountzouris, Associate Professor of Animal Nutrition and Biotechnology at the Agricultural University of Athens, estimated that the removal of antimicrobial growth promoters on a farm can result in a two to eight per cent decline in a bird’s daily weight gain and a one to five per cent decline in the feed conversion, depending on production conditions on the farm. Since they were banned in Europe in 2006, there has also been an increased incidence of microbial imbalances (dysbiosis) and diseases such as necrotic enteritis.
Dr Charles Gilfillan, health and feed safety technical manager at Kemin in South Africa, says that one of the reasons antimicrobials produce such great production results is that it helps to keep the growth of pathogenic bacteria in the birds’ guts in check. Strategies to alleviate the impact of the removal of antimicrobial growth promoters, should therefore centre on ways to promote good gut health in animals.
Good gut health has been called the “Holy Grail” when it comes to the maintenance of poultry growth, health and welfare. An imbalance in gut microbiota will have a negative impact on nutrient digestion and absorption, which in turn will affect bird health and performance.
“Modern broilers and layers are placed under immense pressure to produce as much meat and eggs as possible, in the shortest possible time and with as little feed as possible,” explains Dr Gilfillan.
“Broilers are expected to grow from 40g at a day old to 1.8kg or 2kg at slaughter in only four to five weeks. Layer hens are expected to produce around 300 eggs in a 60-week layer cycle. Such levels of production are only possible if a bird is able to optimally digest, absorb and use the nutrients it is fed. Gut health is vital for converting high-cost nutrients into eggs and meat.”
Good farming practices

Poor gut health on the other hand will result in birds not using their feed properly, with symptoms including poor feed conversion, diminished growth and egg production as well as diarrhoea, which in turn may lead to wet litter and a decrease in the general health of birds leading to increased morbidity and mortality.
“Poor gut health ultimately results in higher production costs by causing birds to eat more food without producing more meat or eggs,” says Dr Gilfillan.

The balance of the microbiota in the gut can be affected by external factors, such as:

Fortunately, most of these conditions can be prevented through sound farming practices. Many infections, for example, can be avoided by following sound biosecurity measures and having a vaccination protocol tailored to the specific requirements of the farm. The quality of feed and water should be tested and monitored and sound sanitation practices should be used to prevent feed or water from becoming contaminated. Environmental stress can be reduced through climate control and by using lower stocking densities.

Producers might also look into using feed additives, such as probiotics and prebiotics, to enhance gut health. Probiotics, explains Dr Gilfillan, are live microbial organisms that are fed to a bird to enrich the populations of microbes found in its intestine: “Enhancing the natural microflora of the gut, will naturally keep the growth of pathogenic bacteria in check. This in turn will maintain the health of the intestine which will ensure that the bird is able to optimally use nutrients in its feed. This will ensure the bird performs close to its genetic potential.”
Examples of probiotics include Bacillus subtilus PB6 and Lactobacillus as well as certain yeasts and moulds, such as Saccharomyces boulardii or Aspergillus oryzae.
Professor Mountzouris explained at the AFMA Forum that there were a few mechanisms through which probiotics help to enhance gut health. One way is by colonising the intestine of the bird, which in effect prevents pathogen adhesion to the intestine’s mucus membrane. Probiotics can also work by preventing pathogen growth through the production of volatile fatty acids dynamics or competing with the pathogens for nutrients. By repressing pathogens, they also helped to improve the birds’ immunity.
Prebiotics, the other strategy Dr Gilfillan suggests farmers might consider, are fibres that are not digested by the bird, but can be used as an energy source by bacteria in its gut.
“Prebiotics are added to enhance the growth of beneficial bacteria including probiotics in favour of pathogenic bacteria,” explains Dr Gilfillan, “thus enhancing the ability of the natural intestinal microflora to keep the growth of pathogenic bacteria in check.” He adds that ‘synbiotics’ – a new buzz word in antimicrobial feed additives – simply refers to a combination of both pre- and probiotics.

There are an abundance of products containing live bacteria and yeast that can be fed as probiotics to poultry as well as numerous products containing indigestible fibres like mannan- and fructo-oligosaccharides that are used as prebiotics in poultry feed. But how can you ensure you are buying a good-quality product?
Dr Gilfillan’s advice to farmers is to ask probiotic and prebiotic manufacturers or vendors for proof that the products work: “The company needs to be able to back up the claims made about products with scientific data. The farmer shouldn’t buy a product if there is not data.”
“The data should be in the form of peer-reviewed articles that have been published in internationally recognised scientific journals,” he continues, “or the company should be able to present the farmers with data from well-designed trials that clearly show the benefit of using the product. If the farmer has problems with interpreting the data, then they need to get assistance from a vet or animal nutritionist specialising in poultry production.”
Quantifying the value of the savings that biotics can bring to a farm is very difficult. “No two farms will receive the same benefit from using biotics,” says Dr Gilfillan, “as the management will differ from farm to farm, as will the feed used. But if used correctly the use of pre and probiotics should improve feed conversion ratio and improve the health of the birds, which will result in a monetary saving for the farmer.”

Adding whole eggs to a colourful salad boosts the amount of Vitamin E the body absorbs from the vegetables, [...]

You’re tired of searching for information on websites or forums that offer random opinions about poultry challenges you are [...]

How do you tell a chick’s temperature?

There are several options to measure the chicks’ temperature and to see whether it’s normal. Small chicks’ feet must never [...] 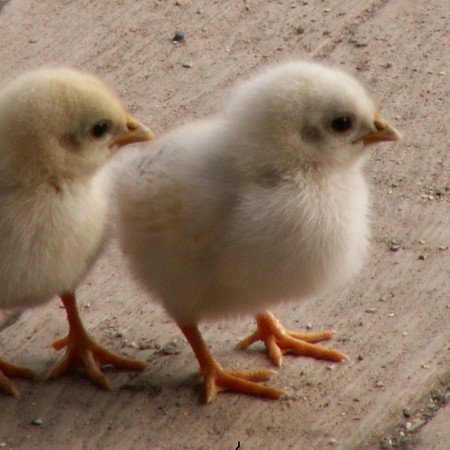 Incubation and eggs for hatching We are talking about incubation, where the quality of the chick is only as good [...]

Bill Gates “I would raise chickens”

The other day I whilst setting up a trial for one of the many drinker systems we try out [...]